Hi, I'm back. I know I haven't written in a while and I'm sorry about that. Enjoy this blog!

On April 14, 2021 it was a gorgeous day out. The temperature was perfect... perfect for what we had planned that day.

The day before my dad had made a plan with my uncle that if the weather was right, we could go to a spot where we knew there were a population of none other than- Queen Snakes! My family had tried to find this species last year on Father's Day... to no avail. This year though we had more hope of finding one, for it seemed the easiest time of year to get them was in April or in May. My mom would not be coming- she planned to have a day off to enjoy herself.

That night before I went to bed I looked at pictures from iNaturalist of Queen Snakes, and then fell asleep with dreams of us finding Queen Snakes.

The drive was about an hour away but it would be worth it, because we were going to find Queen Snakes!

When we got to our destination, we met up with our cousins and Uncle. I had up to that point seen 32 species of herps (reptiles and amphibians) in Ontario. My uncle and cousins are really big campers, going to some really fantastic spots in Ontario and have tried and seen some awesome herps too; like Eastern Massasauga  or Ring-necked Snake, both species I need. They had even found Smooth Greensnakes at a trail in Wellington! The Queen Snake would be a lifer for all of us.

Now I should give you a bit of detail of Queen Snakes. Queen Snakes have only a few populations in Canada, all of them in Ontario. The farthest north population is somewhere in the Bruce Peninsula. Their population is only on the east side of the U.S and Canada going as far south as Atlanta and as far west as Arkansas (which is far from the mass of the population). Queen Snakes are a semiaquatic snake species, meaning they have to bask in the sun after coming out of the water since they're a cold blooded species. Their habitat is usually low shrubby plants over-hanging or beside rivers, with lots of river debris for a hibernaculums. They almost never go far from their river, canal, pond or ditches (the last three they usefully don't live in, but if the conditions are right they might). They will usually be basking on the overhanging branches of trees, shrubs and rocks. They are listed as endangered, so please if you find one, don't make it public but tell a local helper or a conservation area so they can protect and help this species. The most interesting thing I know about them is what they eat. They are specialists at catching freshly molted Crayfish. Yep, you heard me; freshly molted Crayfish! I think that's pretty awesome! 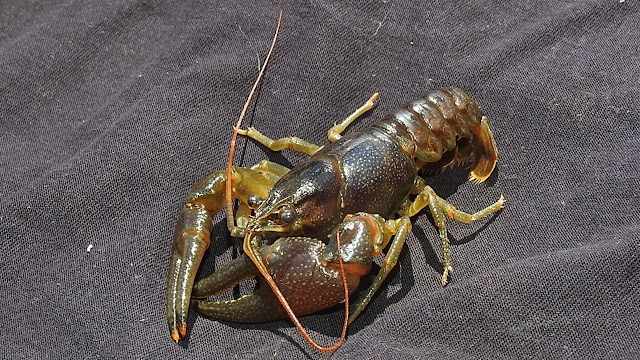 When we started our walk we went right to the river, and over to the spot where we had been informed one of the Queen Snakes hibernaculum was. We started our search looking in bushes and overhanging trees, even looking for them swimming in the water. We believed the late morning was when Queen Snakes would be out sunbathing themselves so we started the search at ten.

We started moving on a few minutes later, moving up the river watching every possible spot hoping to see the majestic snake or snakes. At one point I was a bit distracted talking about an amazing series of books with my older cousin (another passion of mine is reading!) but we refocused our energy on the search soon enough.

About an hour of searching only produced one snake; an Eastern Gartersnake. We had reached a turning point and were turning around to get to our car, eat lunch, and look a bit more. When we got to a bridge that was close to the car, my uncle and my dad left me, my siblings and cousin to wait until they got back.

I had gotten two year birds; a singing Pine Warbler and two Northern Rough-winged Swallows. When they got back we had our lunch, consisting of nuts, crackers, applesauce and apples. We had spent at least three hours now, going up and down the river and now it was time to try the other side. My hope was renewed a little but not by much. We still searched hard though, still to no avail.

We decided that we had spent long enough, so we started to turn around. We still looked on the way back, but our hope was diminished. We took a different way on the way back, still on the same side.

My uncle was just saying that he would think this spot would be perfect for Queen Snakes, pointing at a sandy patch two or three metres away from the river. I glanced over were my uncle just passed and my dad was passing when something caught my eye. When I focused my eyes on the object, it turned out to be a snake completely still; a Queen Snake to be exact!

I cried "Snake, snake!" wanting to waste no time. My uncle and my dad spun around seeing the snake, as it started climbing a small tree.

It was a beautiful specimen too, most being banged up by upturning many rocks this one was in good condition.

I called my cousins and siblings over excitedly for them to see the snake too. After a few more minutes and photos, we handled it very carefully, making sure to put it out of sight from anyone that could some how think "poisonous snake!" It was time to go.

It had taken four hours but we finally found one, and I was the one who found it! 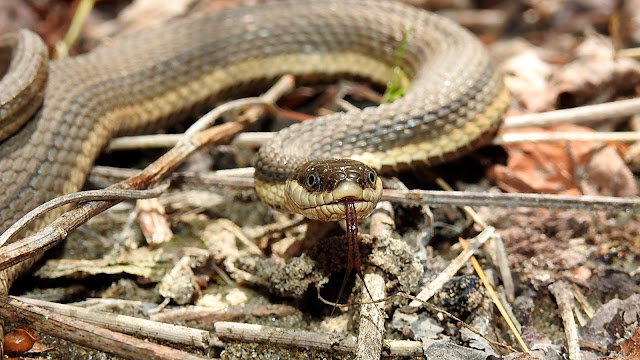 Posted by Desmond MacNeal at 6:04 PM